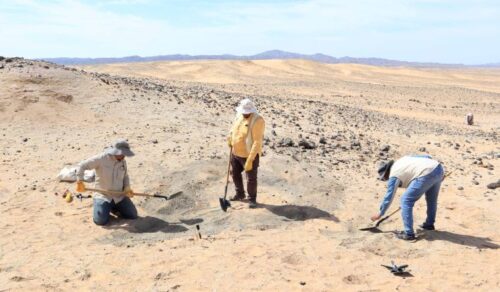 Riyadh, Saudi Arabia, June 1, 2022 / TRAVELINDEX / The Red Sea Development Company (TRSDC), the developer behind the world’s most ambitious regenerative tourism project, and the Saudi Geological Survey (SGS), the main authority in geological exploration and mapping of the kingdom, have partnered for one of the largest surveys of the Red Sea area. Findings from an initial 10-day dig, carried out by SGS paleontologists, revealed several significant findings and areas of interest – including the bones of an enormous marine lizard over 80 million years old.

The survey was the first step on a journey to uncover the rich history of the region and to provide geological research, data and expertise to assist with the design and construction process. The parties intend to continue their work together to identify unique geological attractions for tourism, establishing the Red Sea as a destination where visitors can discover Arabia’s rich natural history.

“The spirit of adventure has always been tied to the essence of discovery. Our destination is already home to the site of Saudi Arabia’s first underwater excavation, but above the water, we are now finding geological and paleontological evidence of millions of years of activity in the region,” said John Pagano, CEO of TRSDC.

“This partnership continues our commitment as a responsible developer to identifying, preserving, and displaying these natural treasures found right beneath our feet. Paleontology is a growing area of study within the Kingdom, and we are hoping to help support interest in discovering the ancient heritage buried along our coastline.”

The excursion along the Red Sea coast, unearthed various samples spanning from the late Cretaceous to the Eocene period – roughly 80 to 45 million years ago. Approximately half of the sites surveyed produced rare fossils, with researchers expecting to discover many more on future digs. The findings represent the first record of marine mammals from the Paleogene period to be found in the Red Sea coastal area.

Scientists exploring the AMAALA site uncovered numerous fossilized remains of sea-cows, crocodiles and turtles, as well as bones of mosasaurs, a family of giant marine lizards commonly referred to as ‘The T-Rex of the Sea’ that existed between 80 and 66 million years ago and reached up to 18 meters in length and 14 tons in weight.

Several marine vertebrates found by the team were recorded for the very first time in the area – including remains of one of the largest turtles to have ever inhabited the region. These findings come in addition to a prior discovery of a partial plesiosaur skull recovered from the site.

Additional discoveries from younger sedimentary beds emerged during this phase of geological exploration in the area include vertebrate and invertebrate faunal assemblages of marine crocodiles and turtle bones, and massive colonies of coral reef barriers. This new information shows us that 20-16 million years ago the Red Sea depth was 200m above today’s actual sea level, and the seawater encroached and flooded deep inland by approximately 100km over time.

In addition to paleontological findings, researchers identified signs of prehistoric human activity among the rocks of the crystalline basement at The Red Sea Project. These signs were in the form of prehistoric rock art thought to be petroglyphs produced by an ancient civilization yet to be identified.

The CEO of SGS, Engineer Abdullah Shamrani said: “The rare finds from the central coastal areas of the Red Sea tell fascinating stories about the evolution of life in the region over the past tens of millions of years. Our partnership with TRSDC is helping us uncover the mysteries of these important and unexplored geological areas, highlighting the true extent of the historic value of the destination. I’m sure we’ll discover important landmarks for geology that tourists from around the world will want to see and learn about for themselves.”

“This partnership between SGS and TRSDC intends to unveil important geological discoveries along the Red Sea region, and we are committed with our significant partner to protect and develop the priceless geological and historical heritage in the Kingdom to produce sustainable touristic destinations in accordance with the kingdom’s 2030 Vision,” he added.

The partnership’s early successes testify to the historical significance of the Red Sea’s coastal waters. Over 1,600 historical and geological sites have already been identified within TRSDC’s development area, and future guests will have the opportunity to discover and explore current and emerging finds.

The Red Sea Project has already passed significant milestones and work is on track to welcome the first guests by the beginning of next year, when the first hotels will open. Phase one, which includes 16 hotels in total, will complete by the end of 2023.

Upon completion in 2030, The Red Sea Project will comprise 50 resorts, offering up to 8,000 hotel rooms and more than 1,000 residential properties across 22 islands and six inland sites. The destination will also include an international airport, luxury marinas, golf courses, entertainment, and leisure facilities.

AMAALA is set across 4,155 sq. km. and due to welcome first guests in 2024. The destination is designed to create a one-of-a-kind global wellness hub and is underpinned by a commitment to sustainable development. The whole development is targeting a minimum LEED Gold standard for environmental sustainability.

The project is being developed over 28,000 km2 of pristine lands and waters along Saudi Arabia’s west coast and includes a vast archipelago of more than 90 pristine islands. The destination also features sweeping desert dunes, mountain canyons, dormant volcanoes, and ancient cultural and heritage sites. It is designed to include hotels, residential properties, leisure, commercial and entertainment amenities, as well as supporting infrastructure that emphasizes renewable energy and water conservation and re-use, as well as a circular waste management system to achieve zero waste to landfill.

Activity for the first phase of development is well underway and is on track to be completed by the end of 2023. The project has surpassed significant milestones, with over 800 contracts signed to date, worth in excess SAR 20 bn ($5.33bn).

The 100-hectare Landscape Nursery, which will provide more than 25 million plants for The Red Sea Project and AMAALA, is now fully operational. There are more than 20,000 workers currently on-site and 90km of new roads are now complete. The Construction Village and the Waste Management Centre are both fully operational and development is progressing well at the Coastal Village, which will be home to around 14,000 people who will eventually work at the destination.

Designed to evolve and elevate the very best in travel, AMAALA is an ultra-luxury destination and the first global integrated family wellness destination, set to curate transformative personal journeys inspired by arts, wellness and the purity of the Red Sea. State of the art facilities and an attractive year-long events calendar will ensure AMAALA is a distinctive wellness destination worldwide.

Phase One of Triple Bay is well underway and set to complete in 2024. It will consist of eight resorts offering upwards of 1,300 hotel keys and 200 residential units. Over 250 contracts have been awarded to date worth in excess of 5 billion riyals.

Once complete, AMAALA will be home to more than 3,000 hotel rooms across 25 hotels, and approximately 900 luxury residential villas, apartments, and estate homes, alongside high-end retail establishments, fine dining, wellness and recreational facilities.

Sustainability is a cornerstone of AMAALA, which will be powered by 100% renewable energy for which the resulting saving in CO2 emissions to the atmosphere is equivalent to nearly half a million tons each year. The destination will operate with a zero-carbon footprint once fully operational. A Public Investment Fund company and a key contributor to Vision 2030, AMAALA will establish new standards in luxury and wellness.